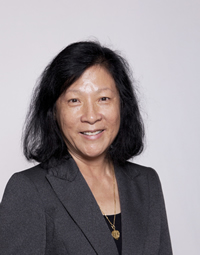 Hui Fang Huang “Angie” Su is a Professor of Mathematics Education. She is the creator of Project MIND – Math Is Not Difficult®, a K -12 mathematics enhancement project currently being implemented in hundreds of classrooms throughout the United States.

Dr. Su is a member of the new Florida mathematics standards framers and writers team. In addition to being the President of FDLA, she is also the President of the Florida Association of Mathematics Teacher Educators (FAMTE). Angie was the Program Administrator and Project Director of the Emil Buehler Research Center for Engineering, Science, and Mathematics at NSU. Dr. Su was the Abraham S. Fischler College of Education Professor of the Year, 2017-2018.  She also has received numerous awards and recognitions, including the prestigious Presidential Award for Excellence in Mathematics and Science Teaching from the National Science Foundation, the William T. Dwyer Award for Excellence in Teaching, Palm Beach County Elementary Mathematics Teacher of the Year, Wal Mart Teacher of the Year, State of Florida's Little RedSchool House Award for principals (for Project MIND), and the Women of Distinction Award from the Soroptomist International. In 2002, Su was named one of the fifty Most Successful Business Women in South Florida by the Fast Track Magazine. She received the 2003 March of Dimes Women of Distinction Award in Broward County. In addition, Su was named 2003 Professor of the Year by Fischler Graduate School of Education and was one of the five finalists as the University Professor of the Year. She was also the recipient of several President's research awards. In 2005, Su received the Governor's Points of Light Award for her innovative work with the homeless women. This award led to the appointment by Governor Bush to serve on his council for the homelessness. In 2007, Su received Sun-Sentinel Publisher's Community Service Shining Star Award. Su is the recipient of the 2009 Mathematics Teacher Educator of the Year from FAMTE. She is the recipient of the 2011 International Conference on Technology and Collegiate Mathematics Award (ICTCM) for her innovative use with technology in mathematics. For her work and services in Distance Education, Su received the 2013 Distance Learning Visionary Award for Distinguished Leadership. On March 13, 2015, students, colleagues, and educators gathered to dedicate and rename "The Somerset Neighborhood School House" to "The Dr. Hui Fang Angie Su Neighborhood School House" in honor of the life work of Founding Board Member.